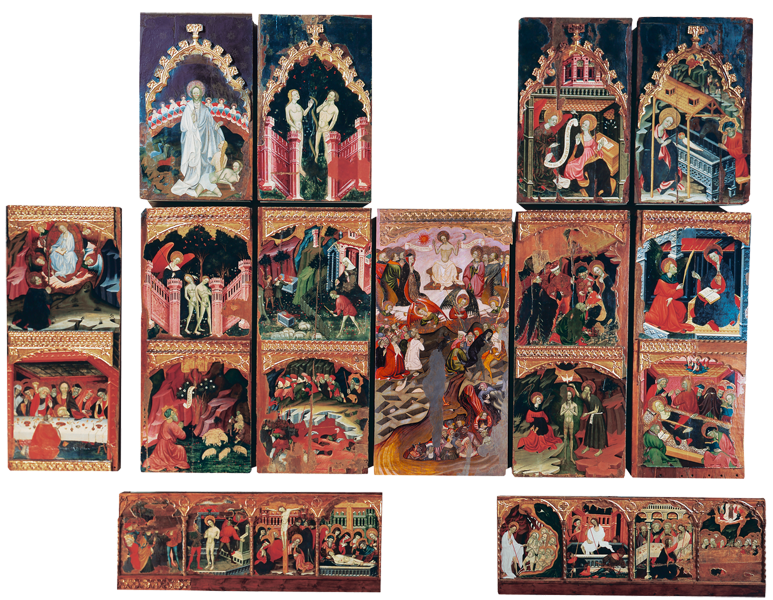 Ramon de Mur was the chief painter representative of the early International Gothic style in the Tarragona school, and was active during the first three decades of the 15th century. From his workshop set up in Tàrrega he produced many works in the 'comarques' of L'Urgell, La Segarra, La Conca de Barberà and Les Garrigues. His most important known work to have been conserved is this large altarpiece from Santa Maria in Guimerà, commissioned by the prominent citizens of that town, almost certainly in about 1402 and not finished until 1412, when it is known that the church high altar was finally set in place. The twelve panels to have been conserved from this altarpiece were admitted to the Museum at the end of the 19th century, coming directly from the church in Guimerà. According to Alcolea and Gudiol's hypothesis, this altarpiece, including the other lost panels, must have measured approximately seven and a half metres high by five and a half wide. The construction of the new Museum building has made it possible to set aside a special place for its installation. In order to be able to get a better view of the upper compartments, the panel with the scenes of the Apparition of the Virgin to Saint Thomas and the Last Supper, the decision has been made to move it to the left of the general composition. The twenty-three compartments conserved in the Museum show scenes from the Old and New Testaments, from the creation of Adam to the Ascension of Christ. The style of Ramon de Mur, like that of the other painters of this early phase of International Gothic, is characterised by the use of a very rich and contrasting range of colours. The fact of having his workshop some way away from the great centres of production allowed the artist to create very original and imaginative scenic compositions, often seeking his inspiration in the popular subconscious. Especially outstanding are the scenes of the crossing of the Red Sea, the Last Judgement and Christ's Descent into Limbo where the blessed come out of the mouth of an infernal monster that frames the scene. As well as this altarpiece, the museum conserves three more works by the artist, including the compartments of a predella from Glorieta (Passanant, Conca de Barberà), with the half-length figures of Saint John the Evangelist, Saint Lucian and Saint Barbara, exhibited next to the large altarpiece from Guimerà. 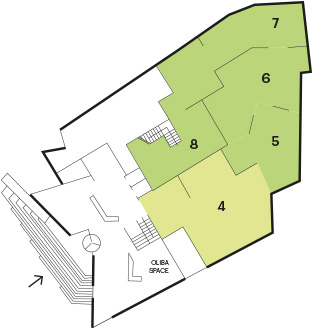