Cope of Saint Michael the Archangel

Emerald-green cut velvet, single corps fabric, bottom twill of three; green silk main-warp and pile warp, green silk weft. Done on the velvet shaft loom; made in Valencia. Decorated with embroidery done on a linen base placed in a frame. Decorative embroidery of gold pattern supplementary weft applied to the velvet. The embroideries of the scapular, the hood and the fastener are picturial, of needle-painted polychrome silks, of long stitch, and chain stitch; and of gold and silver couching point, looped, chequered and filled. Almost certainly embroidered in Vic. All the velvet is covered in embroidery of couched gold forming horizontal lines of large pomegranates, in imitation of the brocaded velvets with the same contemporary motif. The scapular and the hood have needle-painted embroidery with figures. The scapular has eight rectangular scenes, which fall vertically and in parallel in front of the celebrant, when the cope is worn. The central scene, which corresponds to the top of the back of whoever wears the cope, is smaller and does not follow the linearity of the other scenes; this one is placed in such a way that the figures are seen vertically when the cope is worn. The central scene shows the Virgin with the Child, who is holding in his hand the globe represented by the orb. On the right-hand side of the central scene there are four that have figures of saints embroidered with a book or with the attributes that identify them: Saint James the Greater with the book, Saint John the Baptist pointing to the lamb he is carrying on a book, Saint Sebastian tied to a tree and shot through by arrows and Saint Barbara with the tower in her hand. On the left-hand side of the central scene there are four more, with Saint Bartholomew with the dagger, Saint John the Evangelist on Patmos with the chalice, Saint Christopher carrying the child Jesus on his back and Saint Mary Magdalene with the jar of ointment. Each scene is topped by a Gothic arch, the background is plain, of chequered gold embroidered in geometric shapes, and the ground is intended to give a false effect of perspective. The hood is what remains of the little hood of the early copes, whose purpose was to protect the priest from the rain at ceremonies held in the open air. When it fell into disuse, the hood became very small and in the Gothic period wide and flat, suitable for having scenes or figures embroidered on it. The hood has Saint Michael the Archangel, the saint the cope is named after, defeating the devil embroidered on it. The figure is represented on a plain background of chequered gold thread. The embroidery technique is especially refined in the purely decorative part of the velvet. Stylistically it is the equivalent to the last period of Gothic painting. 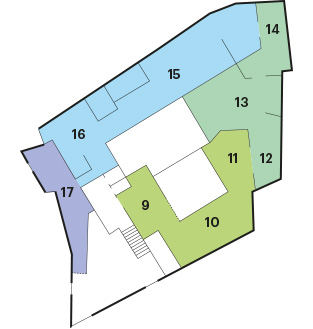